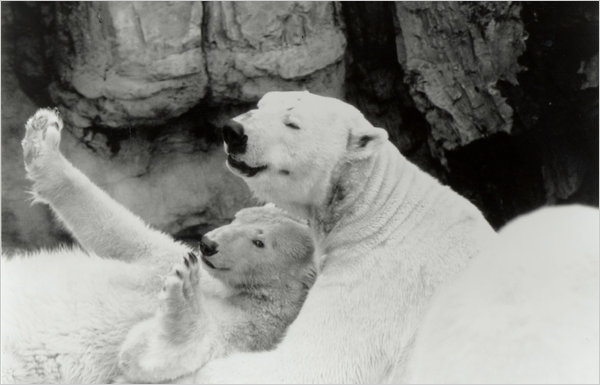 E. Kellerman/Wildlife Conservation Society
Gus, right, and Ida, two of Central Park Zoo's polar bears, in 2002. Ida died last month.
My heart goes out to Gus, the famously neurotic polar bear in the Central Park Zoo, who used to swim endless laps around his pool. He’d dive to the bottom in a froth of bubbles, surge across and then surface like a bear obsessed.
He’d backstroke to the other side, and with great paws splashing, dive down to the bottom and circle around again. Some wags called him the “bipolar bear,” but most zoo-goers sensed that he felt bored, pent-up, out of his element and depressed.
A high-profile animal psychologist, called in by zoo officials, began treating Gus in 1994 with toys, games, more challenging mealtimes and a better designed habitat. Soon Gus seemed like his old self again, lounging and playing with his longtime companion, Ida.
But when Ida died recently from liver disease at the age of 25, Gus grew listless, slouching around his habitat and swimming little, obviously confused and greatly disturbed by her disappearance.
In the wild, male polar bears tend to be loners, who wander long distances through sketchy weather and over shape-shifting ice, with drifting pack ice as home. They go with the floe. But for 24 years, Ida was a pal with whom Gus cavorted and related to in countless ursine ways.
Strangers when they met, they nonetheless had much in common, including sheer tonnage. Surrounded by jabbering monkeys (us), they alone fathomed one another right down to their inner seasons, including the annual lethargy of “walking hibernation,” when polar bears chill out and become less animated, but don’t sleep the months away like other bears. Gus’s array of highly evolved gestures, sounds, skills and moods found its match in Ida.
All the rough and tumble of wet fur and snouts, the weightiness and float, the nubby nonskid (think spa-slipper) feet, and exquisite sense of smell, provided a sensory oasis that polar bears in the wild not only respond to but pursue with a fervor we humans might call passionate longing. Small matter if “passionate” and “longing” are only an unconscious hormonal tugging in the cells. It drives polar bears and other animals with a fierce impetuosity equal to our own.
Gus probably misses Ida’s familiar scent, since polar bears are wizards of smell who will march over ice ridges for 40 miles to reach prey they’ve whiffed, can tell which way a human went 14 hours before, and follow a breeding female simply by sniffing her tracks.
Many animals have singular personalities, preferences and idiosyncrasies. When they play together, they reveal different aspects of their temperaments, just as we do with friends and loved ones. So when Ida died, Gus not only lost his old mate, he lost those parts of himself that related to irretrievable parts of her. Could a new friend, welcome and distracting as one might be, fully replace the longtime bond he had with Ida?
We may never find out. The zoo is not likely to provide Gus with a new sidekick or mate. Wild polar bears are protected, so zoos must buy, barter or finagle bears from other zoos, where, because they’re not plentiful breeders, they’re prized and scarce. Also, at 25, Gus is elderly by bear standards. A lucky polar bear might live to 30 in captivity. So even if the zoo provides him with a new companion, she in turn could soon become the bereaved.
It shouldn’t surprise us that zoo visitors commiserate with Gus, because humans have always admired polar bears. To the Greenlanders, they’re revered as Masters of Helping Spirits; to the Lapps, they’re Old Men in Fur Coats. To New Yorkers, they’re a vision of the wild among us, emissaries from an Arctic realm most of us will never visit, a reminder of nature’s sublime strangeness and beauty.
People speak of Gus’s grief as if it were anomalous. But what if it’s just part of a large suite of ancient urges and instincts we share with hordes of other animals?
Source: http://www.nytimes.com
Postado por Carlos-Teacher às 18:29